forced the University of Ottawa to cancel her scheduled speech there tonight. The lefties apparently scared the living bejesus out of , not Coulter, University officials who feared violence.

The move followed boisterous demonstrations outside that sponsors of the appearance feared could turn violent.

“There was a risk there could be physical violence,” said Canadian conservative activist Ezra Levant, who was scheduled to introduce Ms. Coulter.

Once again, the politics of love and tolerance show their true colors. Oh but it gets better. The University actually sent her a warning, threatening her with ummm … jail time, if she violated Canada’s hate speech laws. Peace out!

In an unusual move, the University of Ottawa had sent her a warning before her speech, cautioning Ms. Coulter to watch her words lest she face criminal charges for promoting hatred in Canada.

“I hereby encourage you to educate yourself, if need be, as to what is acceptable in Canada and to do so before your planned visit here,” University of Ottawa academic vice-president François Houle wrote.

“Promoting hatred against any identifiable group would not only be considered inappropriate, but could in fact lead to criminal charges.”

“Does Michael Moore get a letter reminding him to be civil and threatening him with criminal prosecution?” Ms. Coulter said.

Here’s the interview she did tonight CTV: 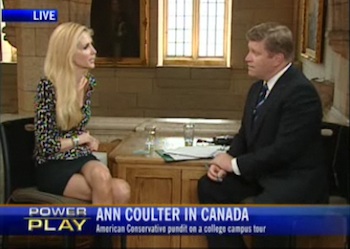 For the record Coulter has turned the tables on Canada:

Even though Coulter is not a Canadian citizen, Levant, who has been involved in human rights law cases, said it would not be “outlandish” for Coulter to file a complaint against the University of Ottawa, especially in light of the 1985 Singh v. Minister of Employment and Immigration case.