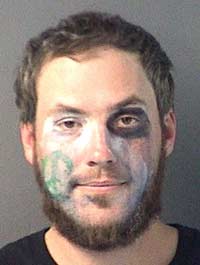 I’m very pleased this man has been charged with a felony, and has admitted to his crime. These stupid decisions – normally made by kids but in this case the perp is 32 years old – stay with you for life. Soon, he’ll be complaining he can’t get a fair shake in life because of his criminal record.

Jim Hoft at Gateway Pundit points us over to The Smoking Gun.

The 32-year-old “Occupy Pensacola” protester was arrested yesterday on felony burglary and larceny charges for allegedly robbing a neighbor’s home of furniture that he used at the protest group’s encampment outside City Hall. …

When questioned by a deputy, Scott stated, “Yes, I took the furniture. I was going to give it back, but haven’t had a chance to.” Scott, investigators noted, admitted entering English’s home through a rear window, taking the furniture, and using some of the purloined items “at the Occupy Pensacola Camp located at City Hall.”

Fighting back: Pennsylvania man shoots teens in self defense, one dead

Occupy London, or not…

Obama Energy Secretary: no our goal is not to lower gas prices (video in co...
Scroll to top