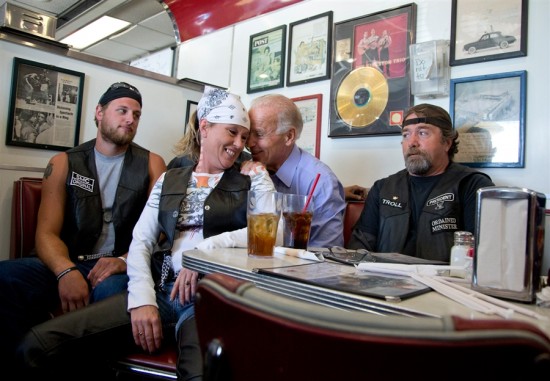 Vice President Joe Biden certainly took a hands-on approach to his duties while he met senators during a mock swearing-in photo shoot yesterday. Joe will be Joe, and we can be pretty certain Binden has met most of these people before, but you have to love the occasional awkward moment. One anchor on the Today show this morning thought Biden was a blast.

This is a man – from all that we know – plans to start running for president the week after the inauguration.

During the swearing-in ceremony, Biden joked with new Senators and their mothers, prepared a female Senator by telling her she would be “frisked,” and offered some workout advice.

Vice President Joe Biden on Thursday turned himself into a one-man welcoming committee for the newly elected senators in the way only Biden could accomplish.

“Spread your legs, you’re gonna be frisked!” Biden quipped to the husband of freshman Sen. Heidi Heitkamp of North Dakota after photographers capturing the reenacted swearing in asked him to drop his hands for the photo. Heitkamp, a Democrat dressed in a red power suit, broke her pose to stare at Biden as she burst into laughter.

“You say that to somebody in North Dakota they think it’s a frisk. They think you’re in trouble right?” Biden asked.

When asked what the hell Biden was talking about, nobody could respond.

Biden on vice presidency: It’s easy ... you don’t have to do anything

Law enforcement AR-15s referred to as “patrol rifles” – not...