I was listening to Howie Carr’s show yesterday afternoon and he featured an “interview” he had with Dutch concerning the government’s involvement in health care and the slow, but methodical implementation of a socialist structure into our culture. Here’s the audio from Carr, and Reagan’s full speech from 1961.

Originally published at RVO on Aug. 14, but pushed back up Aug. 27.

Worth 15 minutes of your time this weekend. Please, click on the audio and ensure your speakers are on.

First, Carr’s interview with Reagan from his show yesterday afternoon. 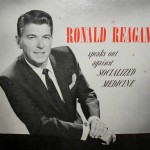 One of the traditional methods of imposing statism or socialism on a people has been by way of medicine. It’s very easy to disguise a medical program as a humanitarian project. Most people are a little reluctant to oppose anything that suggests medical care for people who possibly can’t afford it.

Now, the American people, if you put it to them about socialized medicine and gave them a chance to choose, they would unhesitatingly vote against it. We had an example of this under the Truman administration. It was proposed that we have a compulsory health insurance program for all people in the United States and of course the American people unhesitatingly ejected this. So, with the American people on record as not wanting socialized medicine, Congressman Ferrand introduced the Ferrand Bill. This was the idea that all people of social security age should be brought under the program of compulsory health insurance………….”

Change we can believe in … or else

This is it! Open Thread