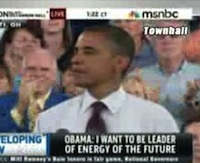 As a conservatarian and I find this chunk of video from Barack Obama’s campaign in Ohio yesterday simply chilling. You’ll just have to decide for yourself.

Via The Right Scoop, Obama makes the Federal Government sound more like Santa Claus instead of super Nanny, either way he is using the left’s young and old alike greed for free to bankrupt your children… useful fools.

Interesting and stomach churning at the same time. Maybe even more interesting by Utah Mayor and Congressional candidate, Mia Love’s appearance yesterday on Sean Hannity show . While we cut the video another Hat Tip goes to Right Scoop: we must make the moral case about the future we are leaving our children.

She’s right you know which is why the Mayor of Saratoga Springs, Utah, must go to Congress

Hey you Coupon Clippers… Look over there it’s the TAX MAN!

Doubling Down on Stupid

Gallons per hour: a new metric for the lousy Øbama economy?
12 replies

Alan Greenspan to Larry Kudlow: No the stimulus did not help. Actually it h...
Scroll to top