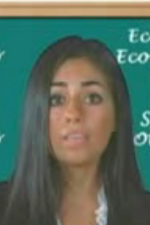 A recent video from the Center for Freedom and Prosperity caught my attention during the last couple of days. Hiwa Alaghebandian – who we have seen before – explains how Keynesian economics represents the opposite of what should be happening. It’s a good primer for those looking for information.

Alaghebandian encourages us to take a look at gross domestic income and how it can play an important role in boosting the economy while government spending just shifts the source of the spending from one group – individuals – to the government sector. Nothing is gained … the economy does not grow.

Of course, outside sources do come into play when investment dollars flow in from outside the United States (borrowing) and that can help in the short term, but certainly won’t help the economy and consumers become more buoyant … especially when we’ve hit a tipping point and American’s klnow we’re leveraging our grandchildren and great-grandchildren.

So, here’s the Econ 101 video for you. Don’t be afraid or put off if you need to watch the video two or three times to understand the concept.

“It’s not your money” Cavuto video

Balancing The Recession On The Backs Of … Men?

Cap and Trade is a cap on our economic growth

Leslie Nielsen we will miss you

They are not the ‘Bush tax cuts’ anymore
Scroll to top