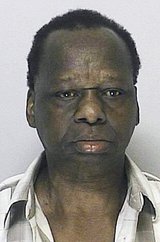 Onyango Obama, the uncle of the president recently arrested for drunken driving was “quietly released” from jail yesterday, according to the Boston Globe. Apparently, he was released as a first test case for the new “backdoor amnesty” the administration announced last month, according to the Washington Times. Surely, it is just a coincidence that it involved the president’s uncle. You all remember Auntie Zeituni Onyango, another illegal alien family member of Øbama?  Who next?

I would add that Øbama (the drunk one) benefited from the illegal immigrant coddling enforcement policies of the local Øbama (the president) mini me, Massachusetts Governor Deval Patrick.  In addition to supporting in state tuition for illegals in Mass., he refuses to sign the Secure Communities program, a federal program designed to prioritize the removal of criminal aliens, those who pose a threat to public safety, and repeat immigration violators.  I guess drunk drivers don’t qualify as a threat to public safety in Massachusetts.

And this is not Patrick’s first foray into this arena: just a few weeks ago, Patrick held that the dragging death of a 23-year-old Milford man by an illegal alien with a long arrest record discovered after performing a free public criminal record check was immaterial.  Read the story; it is horrifying.  But at least Patrick did say it was tragic.  How nice.  According to this story, there was ample opportunity to take this dangerous illegal alien off the streets for good.  The illegal, a Nicolas Dutan Guaman, has a long list of violations dating back to 2007, including driving without a license, as well as more serious charges.  In 2008, Milford police arrested the Ecuadorian national for breaking and entering and assault and battery on a police officer.  I guess that in Deval Patrick’s mind, these are trivial transgressions.  Unless you or I or some other legal citizen did it.

How many more innocent citizens have to die before Patrick, Øbama and the other illegal alien coddling, vote grubbing Democrats will put citizens before illegal aliens?  Who are they really representing?

Are we heading for an Øbama illegal alien trifecta?

Huckabee on Illegal Aliens – As of Today…

The founder of the tea party calls Tom Friedman and idiot