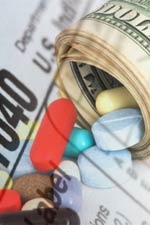 We are now some three months into Obamacare’s new rules concerning Health Savings Accounts, or HSA’s.  We told you about the new rules shortly after they took effect, and, now we can report the outcome.  It isn’t pretty.

HSA’s are used by millions of Americans as a way to pay for health care with before tax dollars.  Typically, the money you decide to put into your HSA is deducted from your pay check by your employer and placed into a special account.  You are usually given a debit card, and, then for example, when you go to your local drug store to purchase over the counter medicine, you use your debit card for payment.

Critics say the accounts encourage overconsumption of medical services. Since consumers typically must forfeit unused funds by year’s end, they often ended up scrambling in December to drain their funds by loading up on aspirin, antacid and the like.

To solve this critical problem, Obamacare now mandates that you can only use your HSA for drugs if you have a doctor’s prescription for said drug.  So, it comes a no surprise that Americans are now calling their doctors to ask for a prescription for aspirin, or NyQuil, or Prilosec.

So, your $2 bottle of aspirin now costs $2 plus your copay for a visit to your doctor, that is, if you are willing to go to all that trouble.

Beyond that, the law is creating real problems for pharmacies.

Thousands of over-the-counter products now must pass behind the pharmacist’s counter when the customer pays with the special debit card.

‘At the moment it’s considered a prescription, it’s subject to all the regulatory requirements,’ says Mike DeAngelis, a spokesman for CVS. ‘It runs through our quality assurance process. We have to generate a label.’ The chain also puts each of the prescribed drugs in an individual paper bag.

The good news, though, in our march toward deficit neutrality, the CBO has estimated that this program will generate $5 billion in additional tax revenue…over 10 years.  Most, if not all, of that will come from those who can little afford it.

Gee, if “end of the year” aspirin hoarding was such a serious problem, wouldn’t it have made more sense to allow unused HSA funds to roll over into the next year?

Oh, sorry, that would have been a logical solution.

Medicare Advantage is dead…well, not quite

Credit where credit is due: Insurance premiums up thanks to ObamaCare

Sebelius to rewrite sections of Obamacare

Malloy To Hospital CEOs: ‘I Know You All Want More of My Money’
Scroll to top