Will he have the political guts to do it? During the last 24 hours, we’ve heard from various sources that President Obama – during tonight’s press conference billed as his six-month report card and a defining moment for the new guy – will claim they have “rescued the economy from the worst recession.”Can Rahm Emanuel, along with our somewhat-polished president actually pull out the Mission Accomplished banner – well before any economic turnaround – and not ensure a legislative end to Obama’s presidency?

Morrissey over at Hot Air puts it out there…

Putting that aside, the idea that the economy has generated enough good news to claim any sort of credit seems ludicrous to everyone living outside the Beltway.  Unemployment continues to rise, and even Obama himself said it would go into double digits this year.  Last week, the number of seasonally-adjusted new claims for unemployment was 522,000, while the unadjusted number was 667,000, an increase of over 86,000 from the previous week. Retail sales were up last month, but most of the increase came only from a sharp rise in gas prices.

Does Barack Obama really plan to take credit for this? Does he think Americans feel “rescued” at this point?  That claim will mark him as out of touch with the American electorate, while at the same time forcing him to take ownership of the economic crisis and eliminating the “inherited” defense.  If Americans had already begun to distrust his acumen on economic policy, this will accelerate that trend mightily. 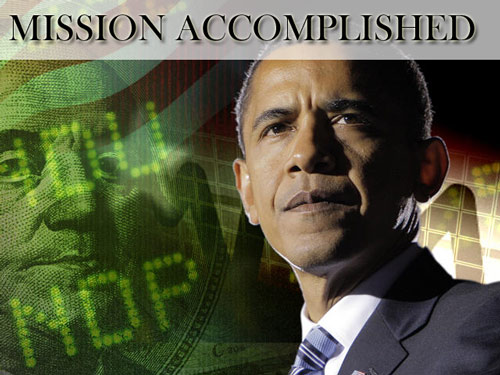 Special forces community do not appreciate or welcome publicity

The “Shoe” Is On The Other Foot Now

The case against an Obama presidency

Joe says “No”, and he’s not the only Democrat – UPDATE: Snowementum
2 replies