This is what leadership in the United States has become. Criticize private business – the very essence of the capitalist system – at every turn, and in every way possible and then go out and demand they “do what’s right” and hire workers. More proof this guy knows nothing about running anything.

President Obama thinks companies have so much money they should just hire employees to come in and stare at a cubical wall for eight hours a day. From Reuters.

[President Obama] said businesses and banks that reaped the rewards of extraordinary measures to pull the country out of a deep recession had a responsibility now to invest hordes of cash into U.S. jobs.

“It is time for companies to step up,” Obama said.

“American taxpayers contributed to that process of stabilizing the economy. Companies have benefited from that, and they’re making a lot of money, and now’s the time for them to start betting on American workers and American products.”

President Obama is asking businesses to take unreasonable risks by hiring staff to appease him, and I’m willing to bet mandates are around the corner. These are the type of moves that put us into the current economic downturn. I guess Obama thinks private businesses can handle huge deficits and debts just like the US government.

UPDATE (Jim): Here’s the President at a CBS Townhall saying pretty much the same thing … with a little extra. He now says it will take years, not months before businesses start hiring. And that it’s businesses fault. H/T Jim Hoft. 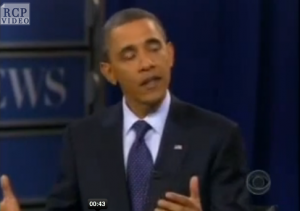 Hope and change my little mobsters.

Obama sets us up for double-dip recession – his words

The true cost of hiring just one employee

Will the European Union’s open border policy hold over time?