OK. A paraphrase. But even as the President stood before Chamber businesses … his little regulators were hard at work, well, regulating. The question is, has this President changed? Is really listening to business, or is he still pushing a command economy. State-ists, fear not. No change here.

Some video for you, then you can decide for yourselves. First up, the President speaking to the chamber yesterday, the President announced he would review and eliminate outdated regulations that have become a logistics nightmare and,as he has come to understand, keep hiring down.

Let’s get rid of those “outdated and unnecessary regulations,” the onetime corporate scold said, and remove that “burdensome corporate tax code with one of the highest rates in the world.”

The president boasted that his administration had slowed down environmental rulemaking and accelerated drug approvals. Rather than browbeat corporate America, as he did in his early days in office, he pleaded for more hiring with sports phrases such as “get off the sidelines” and “get in the game.”

Ahhh … the carrot … and now the stick. Time to spread the wealth around:

Change. I remember as a young employee and proud union member I used to believe that companies paid lower level workers too little and conversely, upper management too much. What I lost sight of, and the President still doesn’t understand, employers don’t pay workers based on what people consider “fair”, they pay based on “worth”. They hire employees based on need and pay no more, nor less, than what it takes to bring the worker on and provide value to the company.

More irony. Even as the President called for an end to unnecessary regulations … his minions were pouring it on. Take a look at this screen cap from Fox News last night. 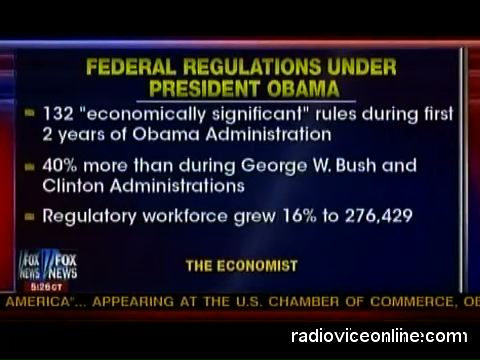 Not to mention … the latest from the Labor Department. No big secret to the Chamber President who said he worries most about the new regulations that haven’t been placed on business from the EPA, DOL, not to mention Obamacare. Change? Not so much. But then they always tell you who they are.

Last night Fred Barnes on the Fox All Star panel called the visit a “fake” while Krauthammer called it all show. The bottom line here is the President know he needs business, not so much to elected but to get the economy moving, which I guess are one in the same. What he does not understand is he can’t command it.

Hey … These are my peeps

Still waiting for reporting on “progressives” who want SCOTUS Judge...
Scroll to top