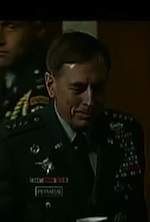 Interesting, don’t you think? Although I doubt our President is that Machiavellian … still. The appointment of General David Patraeus is a win, win, win for Obama, and after all, isn’t that what he’s all about?

The first win is the man who developed the counter insurgency that won the war in Iraq will now be asked to work his magic on Afghanistan and I agree with the pundits, at least to the public, if he can’t win this, who can?

But the second win for Obama comes from the Daily Beast:

So Obama has reason to be delighted with himself right now: He has sacked a recalcitrant big-mouth; he has entrusted said big-mouth’s job to a certified hero and military star; and he’s taken that star out of contention for 2012, making his own re-election that much more likely, given the headless turkey that is currently the GOP.

Hmmm, what do you think? I guess anything is possible.

I felt it – Earthquake in central Canada felt in Hartford County