Just two days into the gig, and Jay Carney – the new White House spokesman – gives us two shining examples of twisting the truth in a grand attempt to rewrite history … or just forget it all together I guess.

To paraphrase, the Stimulus Act – a.k.a. porkulus – had certain goals in mind, business objectives if you will. All of those ideas were virtuous, and those goals “have been met.”

Huh? Yesterday, we were no longer adding to the national debt, and today all of the goals of the stimulus spending have been met?

Click to watch the video over at Real Clear Politics.

Exit question: If the goals “have been met” can we cancel the rest of the funding that has not been spent? 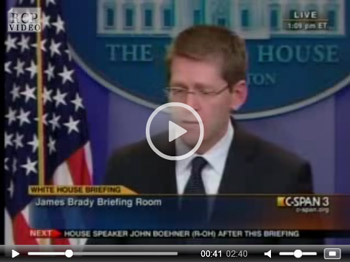 Terrorist trial decision made six months ago by White House

A Slice of Reality for Governor Malloy
Scroll to top