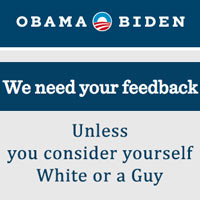 The Obama administration’s political wing is moving into intelligence gathering mode since they don’t have to worry about a campaign in the future. I guess they are trying to collect information for future use. But they don’t seem interested in hearing from the “white” or “men” constituency groups.

Update: They don’t seem interested in the military constituency group either.

For certain, they do ask if you are a male or female up at the top of the survey, but when it comes to constituency groups you identify yourself with, they break-out women, but give no men option. They break out African Americans, Arab Americans, Asian Americans, Jewish Americans, Latinos and even LGBTs … but nothing about White people.

Barack Obama, the Uniter, is finally coming clean – he is admitting he sees Americans not as a group striving for commonality in American values, but an amalgam of separate constituencies proud to claim their separate identities.

More at CNSNews, and here is the screen shot just in case they update the survey after an “inadvertent mistake.” 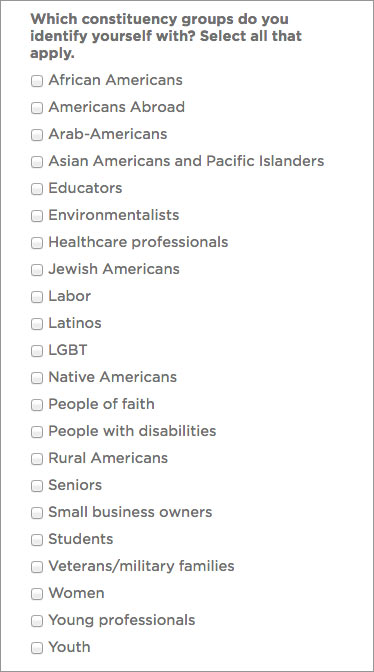