Today, President Obama totally contradicted himself in the same paragraph, but it’s nothing new. He’s trying to claim we’re drilling a bunch of oil as compared to the past, but he’s refusing to tell you the full story, which is not that hard to understand.

Sorry Mr. President, you  can’t say we’re producing oil at a record pace and then in the next sentence change your mind and say we’re producing more oil “than at any time in the last eight years.” Both statements can not be true, they are absolutely mutually exclusive. From Obama’s remarks earlier today, with my emphasis in bold.

And again, I just want everybody to be clear — because sometimes, when you listen to the news and you listen to some of these other politicians, they seem a little bit confused about what I’m saying.  We are going to continue producing oil and gas at a record pace.  That’s got to be part of what we do.  We need energy to grow.  That’s why we’re producing more oil right now, here in America, than at any time in the last eight years — any time in the last eight years.  We’re opening up more land for oil exploration.  We’ve got more oil rigs operating.  There are more pipelines out there that are being approved.  I’ll be visiting one of those rigs and one of those pipelines this week. 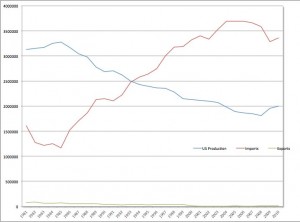 I brought you some facts back on March 1, which the president did not obviously read. The president is the one who is warping history, and heaven forbid he actually speak the truth. He’s the one who is confused. Don’t let him get away with these half-truths … forward this via email and social media to your friends.

As it turns out, US oil production since 1985 has been on the decline. As a matter of fact, we are drilling – here in the United States – about 37 percent less crude oil than in 1985. In fairness, production actually did hit a 30 year low in 2008 where field production was about 1.81 billion barrels and it’s climbed to just under 2 billion barrels in 2010. 2010 is the last full year available at the EIA website for that statistic.

Read my previous post which – unlike the president’s statements – actually bring oil production facts to the table.

And don’t forget, he’s totally misleading the robots about oil scarcity too.

… head over to Hot Air and read Jazz Shaw’s post on the false-hoods Obama keeps regurgitating at campaign events. Shaw and John Merline over at Investors Business Daily squash the “we only have 2 percent of the world’s oil reserves” myth.

Obama: International community should not avoid action during genocide
29 replies