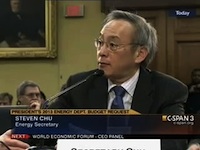 Department of Energy Secretary Steven Chu says it all in this one piece of video.No the ultimate goal of the Obama administration is not to ease the burden of higher gas prices, it’s to get you in electric cars or … on trains … or buses to no where. Courage!

Chu expressed sympathy but said his department is working to lower energy prices in the long term. …

“But is the overall goal to get our price” of gasoline down? asked Nunnelee.

“No, the overall goal is to decrease our dependency on oil, to build and strengthen our economy,” Chu replied. “We think that if you consider all these energy policies, including energy efficiency, we think that we can go a long way to becoming less dependent on oil and [diversifying] our supply and we’ll help the American economy and the American consumers.”

Catch the rest here at Commentary … or here at Hot Air.