This is dangerous ground, and not unexpected. The Obama administration continues their assault on insurers by demanding Anthem Blue Cross in California justify a proposed 39 percent rate increase by customers. Certainly, this is a huge premium increase, but why the jump?

[Welcome to Michelle Malkin readers! I’ve taken the liberty to try and fix some of my terrible grammar.] 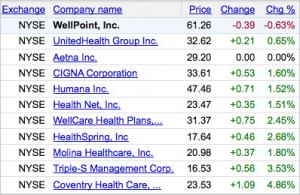 It’s perfectly fine and appropriate for customers to ticked off at the increase in rates and ask the company to justify the increase, but when Obama administration officials – including Health and Human Services Secretary Kathleen Sebelius – gets involved and demands answers, it puts undo pressure on the company. Note the WellPoint stock price as of noon ET today in the graphic. Click to enlarge.

President Obama is also bringing up the premium increase and using it as a political talking point to drive additional interest in getting some sort of health care legislation through Congress. Hat tip to Michelle Malkin who links to a SFGate article online.

Meanwhile, the state Department of Insurance demanded that Anthem delay its rate increases until May 1 to give the state time to investigate. Insurance Commissioner Steve Poizner said last week that he plans to hire an outside actuarial firm to make sure Anthem is spending at least 70 cents of each premium dollar on benefits.

The Obama administration and Poizner’s office were prompted to act after Anthem members with individual policies – those who are not covered through employer-sponsored or group plans – were told last week that they would have to pay premiums up to 39 percent higher than their current rates. The Woodland Hills (Los Angeles County) company would not say how many people will be affected, but Anthem has as many as 800,000 individual policyholders – more than any other for-profit insurer – in the state. Read more…

OK. A 39 percent increase in premiums paid by customers with individual policies absolutely sucks and I’d be totally ticked off by the increase. But you’ve got to wonder if Anthem is doing this simply to boost profits, or if they have to – as they claim – raise rates to be able to cover increasing costs. My emphasis in bold.

Anthem, for its part, said higher medical costs as well as a smaller pool of members to absorb the risk made raising rates necessary.

“Unfortunately, in the weak economy many people who do not have health conditions are forgoing buying insurance,” the company wrote in a statement Monday responding to Sebelius’ letter. “This leaves fewer people, often with significantly greater medical needs, in the insured pool. We regret the impact this has on our members.”

So what say you? I completely understand the feelings involved here, but you have to wonder and be willing to research increased costs at the health care delivery point (physicians and other health care providers), and the government required mandates that vary from state to state. If you’re running a company like WellPoint, you don’t just blindly pick a high premium increase and go with it.

Are you willing to do the work to research why Anthem wants the rate increase? Are executives at Anthem willing to step up and detail the issues and explain why they need the increase in premiums?

By the way, what would you say if a health insurance company was a non-profit and requested a 25 percent increase in premiums? You think it would never happen?

Are you one that thinks the anti-trust exemption for the insurance industry is unfair? If so, are you willing to research the reason why many health insurance premiums – with the same benefits in the same area – are virtually the same? Maybe it has to do with actuarial math? Willing to check that out?

Democrats and their human shields … the new agenda