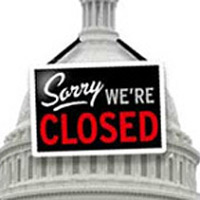 We keep hearing stories about national parks and national monuments being closed due to the government shut down.  But this closure may forever remain a mystery.

Florida Bay can be found between the southern tip of Florida and the Florida Keys.  Sadly, at the moment, it has the misfortune of being designated as part of the Everglades National Park.  No, Florida Bay  it is not what you think of as  “Everglades”.  It is not a shallow swamp filled with alligators.  Florida Bay is mostly open waters, and is known for its fishing grounds used by both charter fishing boats and weekend fishermen.  Well, at least it was.

Charter guides received a message from the National Park Service this week informing them that they are not permitted to take clients fishing in Florida Bay until the feds get back to work. That means that more than 1,100 square miles of prime fishing is off limits between the southern tip of the mainland to the Keys until further notice.

I will not negotiate