When the cost of doing business increases, the business can increase prices, take a lower profit margin, cut dividends, cut labor and R&D, or most likely a combination of those options. Basic business right?

Not so much for President Obama, who thinks the oil companies make too much money and enough is enough. The average net profit margin for the most recent reporting year for the top six oil companies traded on the New York Stock Exchange with market caps of more than $100 billion is 9.4 percent, with a high of 16.22 percent and a low of 6.75 percent.

That is what I would call a reasonable profit margin, but Obama and the left don’t want you to understand the concept of a profit margin, all they give a crap about is a big dollar figure on a white board that does not have enough room to show all the zeros.

In 2008 he stepped out in front of America and let everyone know he was going to take the needed steps to reduce the price of oil and work to solve the energy crisis once and for all. I guess that promise, like many others was a complete lie since now he’s saying there is not much he can do about the price of oil, so we might as well cut the “loopholes” afforded to oil companies to make you feel better by putting the screws to them, and guaranteeing the price of oil and gas will go up.

Democrats always fall back to class warfare. How do people fall for this crap?

President Obama said Saturday he can’t do much to lower gas prices, and renewed his call for Congress to end tax breaks for oil companies.

Got his logic? Can’t lower prices, so let’s just collect more tax dollars from big oil. Well that certainly might give the federal treasury a few more dollars to spend, but that guarantees some of the additional tax burden will be passed on in higher prices at the pump. It also means retired seniors who rely on dividends from those investments might have to do with less, and the oil companies will have less money to spend on research and development of fuel alternatives like bio, solar and natural gas.

“The truth is, the price of gas depends on a lot of factors that are often beyond our control,” Mr. Obama said in his weekly address. “Unrest in the Middle East can tighten global oil supply. Growing nations like China or India adding cars to the road increases demand.”

Mr. Obama said his administration is cracking down on oil profits — on traders who “distort the price of oil, and make big profits for themselves at your expense.” And he called on Congress again to eliminate $4 billion in annual tax breaks for oil companies.

“Your member of Congress should be fighting for you,” Mr. Obama said. “Not for big financial firms. Not for big oil companies.” 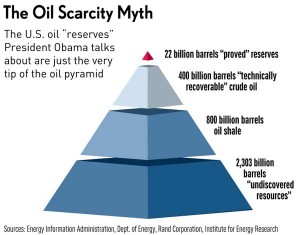 Don’t fall for the political theater of the Democrats (and plenty of Republicans), that’s all they have since facts, business sense and reason are foreign concepts to these bastards.

Next, head over to Hot Air and read Jazz Shaw’s post on the false-hoods Obama keeps regurgitating at campaign events. Shaw and John Merline over at Investors Business Daily squash the “we only have 2 percent of the world’s oil reserves” myth.

It’s up to those of us in the alternative media since Fox, CBS, NBC, ABC, CNN and MSNBC won’t dare to ask the questions, they don’t think you have the attention span. (I’m serious about that, they don’t.)

Obama – Those iPhones and blogs are really straining democracy