Oh no you don’t Mr. President. Republicans had absolutely nothing to do with the ‘problems’ you’re having with the rollout of this monstrosity. He certainly has the habit of placing blame elsewhere does he not?

You indicated there and you’ve indicated publicly quite clearly that the rollout has been difficult. What do you think you’ve learned from this experience about the government’s ability to do this sort of thing, about the law itself or about your own administration?

Here is a portion of his answer in context, with my emphasis in bold. Do go read the full answer if you’d like.

And the last point I’ll make is that — you know, in terms of expectation-setting, there’s no doubt that in an environment in which we had to fight tooth and nail to get this passed, it ended up being passed on a — on a partisan basis — not for lack of trying, because I met with an awful lot of Republicans trying to get them to go along, but because there was just ideological resistance to the idea of dealing with the uninsured and people with pre-existing systems — yeah, there was — there was a price to that. And it was that what was already going to be hard was operating within a very difficult political environment and we should have anticipated that that would create a rockier rollout than if Democrats and Republicans were both invested in success.

One of the problems we’ve had is one side of Capitol Hill is invested in failure and — and that makes, I think, the — the kind of iterative process of fixing glitches as they come up and finetuning the law more challenging.

But I’m optimistic that we can get it fixed.

I’m sorry, I completely missed the legislation proposed by the White House or Democrats to “fix glitches” prior to the full implementation on Oct. 1. Sure there were proposals to throw out the medical device tax, but nothing else. When it came to the employer mandate, Obama did not feel the need to consult with Congress at all. He just delayed it. When it came to hundreds upon hundreds of waivers the president – again – used his magic wand with zero consultation from the Legislative Branch to grant them. Just the other day, he waved his magic wand again saying he “was not going” to enforce the individual mandate’s coverage requirements, and put pressure on health insurance companies to clean up his own mess. This is what happens when the people’s representatives give up more and more power to the Executive Branch to “fix America’s problems.” 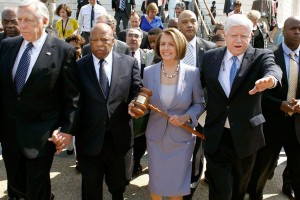 This legislation is totally owned by Democrats. To get it passed the House, they used unique procedures to avoid a final vote. Not one Republican in the House or Senate voted for Obamacare. As a reminder, here’s Rep. Nancy Pelosi (D-Calif.), Rep. John Larson (D-Conn.) and a few other Democrat congress- critters putting the hammer down.

They had more than 60 months to build this federal bureaucracy and have failed miserably. We told you it would be a disaster.

Again, Obama is lying. He had the ball and an open field in front of him. He had more than $500,000 to build a website and the database-driven connections to systems that were decades old. Sweetness & Light asks…

Can Mr. Obama name one specific as to how Republicans were able to affect Obama-Care’s rollout, one way or the other?

He can’t, but Republicans are bad people invested in failure so it’s their fault.

Why I love Texas

There’s no such thing as a free lunch: the cancer drug shortage. A harbinger of things to come?

If Obamacare is so good…
29 replies