President Obama’s approval index as monitored by Rasmussen Reports is currently at -21. That’s negative 21. The index measures the difference between those who strongly approve, and those who strongly disapprove of the president’s performance.

I normally do not write much about the president’s poll numbers on a day-to-day basis, but I’m going to start monitoring results more frequently wondering if the media will define Obama’s first year in office as one of the worst evah. Hat tip to Jim Hoft over at Gateway Pundit. From today’s Rasmussen Reports… 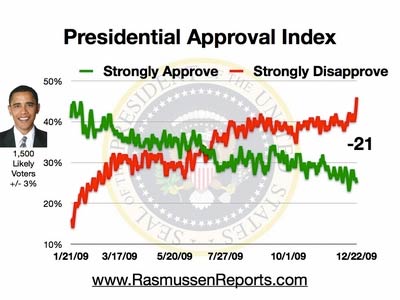 So how about Congress? Real Clear Politics has the average approval index (difference between approved and disapprove) as -38. That’s negative 38. I’m not exactly certain why their approval ratings approved in late spring, but they have been going down hill since then. Click to enlarge.

Mark Haperin: The Obama coalitions are dead, including the …. media?

Cavuto’s shopping tips for women.The health care Medicare Advisory Board that can not be challenged
Scroll to top