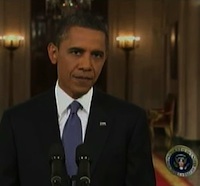 Here’s the video of the President’s withdrawal speech. I think it’s the right decision … 18 months too late. Clearly, if the mission was to pacify or neuter the Taliban it half worked. But if the withdrawal was to keep a campaign promise, it’s a disservice. It’s just, how did green jobs get into this speech? True.

The cynics call it another campaign speech to quiet the lefty natives. The President with a hat tip to his lefty voters, and I think there’s reason to think so. After all, the surge was designed to stop the Taliban. It worked, from what I told, in the south. But still leaves the east untamed. In that sense the mission is not complete.

On the other hand, military people who’ve been to Afghanistan will tell you, you’ll never be able to tame it. The country is too big, too rural. Which begs the question, why do the surge in the first place if the ultimate outcome would’ve been the same had there been no  surge?

But we did learn two things. The Obama doctrine will be planes and drones from now on … and foreign intervention will be to defend our country and … humanitarian missions?

Oh, and one more thing. Remember, when giving a speech on war … don’t forget to include green jobs.