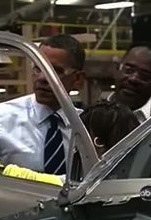 ABC was doing its report on the revival of the auto industry, thanks in large part to the largess of the American people. Something to get the blood going this morning. ABC notes that the Republicans are right … of the 80 billion dollars given to the auto industry … much will never be paid back. Quick, guess whose fault that is … and guess who ABC thinks owns the auto company? You, the American taxpayer? Oh no.

Please keep in mind, as the SOS first pointed out … GM is paying back its loan with taxpayer money. Still the bite, I think says it all.  Good work ABC. Hat tip to Gerry in Torrington for catching this one.

Finally, a “cash for clunkers” for business

I’m doing a triathlon – how about a donation for the American Cancer...

Palin to Obama: No conjones!
Scroll to top