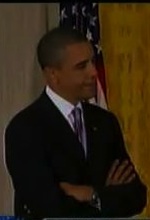 Forgive me for being underwhelmed. The Republicans held all the cards and I don’t see this as much of a victory for the conservative way as a victory for politicians. But still, the tax rates will remain in force for those making more than $200,000 a year and unemployment benefits will be extended another year.

In addition it keeps the Earned Income Tax Credit and the American Opportunity Tax Credit, both favorites of the lefties but little more than wealth transfer payments. These were both increased in last year’s stimulus.

UPDATE: The video has been added. I have tried to include most of the speech to keep the context. A couple quick pointers. The beginning of the video is dedicated to defending his position on redistributing other people’s money and giving some last whacks to Republicans (so much for the bi-partisan President). 3 and half minutes in he details the compromise. But I just can’t get over how he sounds like a sore loser. Allowing people to keep their cash is simply distasteful to lefties. On the other hand paying people not to work is right up their alley.

Here’s a bit from the President’s announcement:

The payroll tax reduction and maintaining the rates will come as a big boost to the economy I would expect. The 13 month extension of unemployment benefits I think is a mistake. Allowing people to remain on unemployment for 3 years is counterproductive to both the economy and to these people themselves. The longer people are allowed to lean on the government for help, the harder it is to bite the bullet and take a job in the marketplace. I know. I’ve been there.

It’s not the scammer that bothers me so much. They will always find a way to scam bucks from someone. It’s the people who at one point truly wanted to work and a job but after 3 years have become accustomed to a government check, plus whatever cash to can pick up under the table. It becomes a lifestyle, their new normal. Not a terribly attractive one and one that offers little promise of ever advancing in life.

This is not the answer. The answer is getting people back to work and that begins by making it easier for business to grow and expand … not more difficult.

Big Brother is not only watching, he’s collecting and archiving
22 replies

If Obamacare is so good…
Scroll to top