President Obama and Israeli Prime Minister Benjamin Netanyahu meet at the White House behind closed doors. Private meetings do not seem all that unusual to me, but supposedly Chuck Todd mentioned no photos at all with the two.

Maybe Obama will send him out the back door with the trash? From MSNBC, with a hat tip to Gateway Pundit. Rush Limbaugh mentioned this on his show right about 12:35 p.m. ET.

However, the afternoon meeting will be closed to reporters, an unusual choice when hosting a close ally and a sign that suggested the rift may not be entirely healed.

No photos from when they first meet in November either.

The White House has not released any official photos of Prime Minister Benjamin Netanyahu’s meeting this week with President Obama – just one of several signs indicating a rift between the two leaders.

No problem for the Obama administration concerning the release of photographs with goofballs like Hugo Chavez from Venezuela. 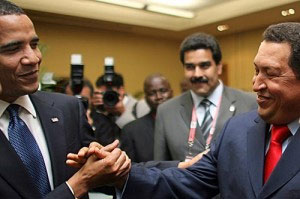 I’ll tattoo Obama on my chest!

Obama: The planet will boil over…