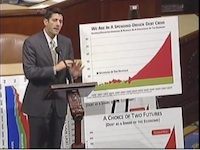 Ten years. That’s all they give a crap about. The goal here is to get re-elected and kick the can down the road.

Secretary of the Treasury Tim Geitner and Rep. Paul Ryan (R-Wisc.) got into a friendly back and forth about budget projections. What I saw indicated Geitner and the Obama administration only wants to deal with the next ten years. Geitner agrees that something will need to happen to deal with the explosion of entitlements during the out years, and admits their budget does not tackel the $100 trillion elephant in the room.

This is not leadership. From AP at Hot Air. The video is from the House Budget Committee.

Phillip Klien notes the relevance as to what was expected by The One, with my emphasis in bold.

President Obama spent much of last year pretending that he had a plan to tackle the nation’s long-term debt crisis. He never released an actual plan, but he gave a bunch of speeches pretending that he had. And Obama pushed the idea that he was privately ready to cut a “grand bargain” on the debt were he not thwarted by intransigent Republicans. This was a narrative dutifully reported by the media, despite the lack of any formal plan. Now, the pretending is over.

On Monday, Obama unveiled a budget that added to the debt while using a series of budget gimmicks to claim deficit reduction. And today, Treasury Secretary Tim Geithner conceded that the administration didn’t even attempt to do anything about the nation’s long-term debt problem.

Federal government spending, where to cut and trim

The Cost of Education
12 replies

The government can impose values … but the church? No way!
Scroll to top