Registered nurse Frank Mannino, 50, was also angry. He said the state regulation violates his personal freedom and civil rights. “And now I will lose my job if I don’t take the regular flu shot or the swine flu shot.” When asked if he’s willing to lose his job, Mannino said, “Absolutely. I will not take it, will not be forced. This is still America.”The protest also shook Albany Tuesday. Hundreds of demonstrators demanded freedom of choice. After all, as health care professionals they argue they’re already constantly washing their hands and aren’t likely to transmit or contract the flu.

Here’s a link to the whole video at CBS 2. Below is a clip from yesterday’s broadcast.

My favorite sign … Hmmmm. Where have I seen this before? All libertarians at heart? 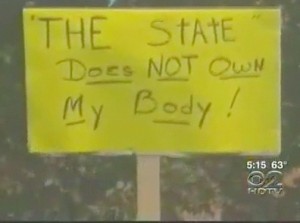 Ask Questions… well except one