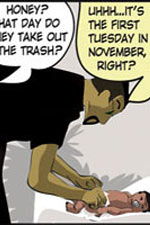 I have heard a number of callers sound a little bit too much like … as AP would say … Eeyore. Well, fire up my friends with this video.

This is the last in a series of videos produced by the Republican Governor’s Association and may I say, this is how political adds should be produced. And with so much at stake, if this doesn’t motivate you to vote the Democrats out … well then I give up, said Eeyore. Via HA

Just or kicks, here’s what it means to be Eeyorish, hey AP?

“Good morning, Pooh Bear,” said Eeyore gloomily. “If it is a good morning,” he said. “Which I doubt,” said he.
“Why, what’s the matter?”
“Nothing, Pooh Bear, nothing. We can’t all, and some of us don’t. That’s all there is to it.”
“Can’t all what?” said Pooh, rubbing his nose.
“Gaiety. Song-and-dance. Here we go round the mulberry bush.”

If you go to the HotAir link there is some good news. Barney Frank is in trouble. Yeah!

The smack down continues: WWE to give out free merch on election day
Scroll to top