Hmmm. Can’t the one One get through a speech without getting called on something he’s said. From the Poltico:

Hot Air has more here. You can watch for yourself.

This is CBS but I’ll have my own later. He’s on the left in the second row just behind Justice Roberts. He shakes his head over and over and says “not true.” Talk about a man who looks disgusted.

UPDATE: OK … here’s my video recorded last night.  It will play without a commercial.

UPDATE (via Instapundit): Bradley Smith at National Review reports either the President is ignorant or …

The president’s statement is false.

The Court held that 2 U.S.C. Section 441a, which prohibits all corporate political spending, is unconstitutional. Foreign nationals, specifically defined to include foreign corporations, are prohibiting from making “a contribution or donation of money or ather thing of value, or to make an express or implied promise to make a contribution or donation, in connection with a Federal, State or local election” under 2 U.S.C. Section 441e, which was not at issue in the case. Foreign corporations are also prohibited …

Go and read it all. Oh brother. Where’s Joe Wilson when we need him?

UPDATE 2: Come on … you knew they would. The claim in the “Main” is that Alito is wrong or at least it’s a debatable decision. Here’s what the AP is reporting and by the way parroted by MSNBC. Here’s what they hanging their hat on.

In his dissent, Justice John Paul Stevens said the court’s majority “would appear to afford the same protection to multinational corporations controlled by foreigners as to individual Americans.” 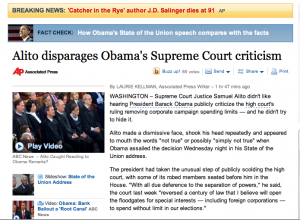 But thus far most legal commentators seem to be siding with Alito although I continue to search. The message from the left is clear: “How dare you contradict Obama.” Never mind the more than unusual “disparaging” criticism of a separate and equal branch of government in a State of the Union Address.

Thank you for calling me Senator ... Bawahhahahaha

Cavuto on Brown, Obama and pickup trucks - Off his rocker

Stimulus: How many jobs were created?