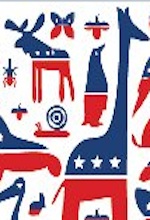 If only this were a coalition of the left and the right working out differences. But alas, it’s just a coalition of mostly liberal politicians who used to label themselves by a political party and now would rather fly stealth. Sigh.

If you are not familiar with “No Lables”, no worries, it’s brand new and they certainly deserve a Hat Tip for brevity. Here’s their declaration:

We are not labels – we are people.

We care deeply about our country.

We are frustrated and concerned about the tone of politics.

We are passionate about addressing America’s challenges.

We are Democrats, Republicans and Independents.

If you cut me do I not bleed? Do I not put my pants on one leg at a time? Am I not a person with feelings? Ok … moving along now … it’s the last part that makes me “worry”.

We believe that together we can make the future better and brighter — and give us what we all deserve — a government and a political system that works — one driven by shared purpose and common sense.

We believe our politics can change, so that government will work again and produce better results.

And yet, we have a crisis of governance – A crisis that compels us to work together to move America forward.

Set aside the fact that this sounds like a high school student’s valedictorian speech, I find it a bit unusual that after 8 years of personal and political attacks, replete with hate speech against “W”, produced no such outrage. No, it’s only after the young President’s incompetence and inexperience becomes blatantly obvious, that a “No Labels” group decides to ride to the rescue.

And lest you think this is a true coalition, read the speaker list my little hostage takers:

I’m still not sure who the Republicans are; Michael “don’t eat that salt” Bloomberg, Charlie “that Obamacare is swell” Crist? Or maybe it’s Joe “No tax cuts for the rich” Scarborough. Maybe these people are calling themselves no labels because they are former Republicans turned liberal.

A true coalition would be a gathering of people who truly believe in smaller government, a less intrusive government with people who are dedicated to the Nanny State and letting them lock horns. Now, that would impress me.

Exit question: So if you were writing a slogan for them, what would it be.

Jim Geraghty already tweeted his best. “No Labels: When you don’t want to give up your liberal positions but are tired of people calling you a liberal.” Now it’s your turn.