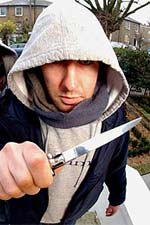 Just asking. Firearm regulation is always brought to the forefront after a shooting or mass shooting, but a “three-state stabbing spree that left five people dead and 13 others wounded” has curiously not resulted in the demand for the regulation of knives.

From the Associated Press.

The Flint stabbings started in May, with the attacker approaching men on lonely roads at night and asking for directions or help with a broken-down car. Then he would pull out a knife, plunge it into his victim and speed away.

Even if the assaults are over, at least some fear remains in Flint, the battered industrial city where most of the stabbings, including all five deaths, occurred.

“It makes you not want to give anybody a hand with a vehicle if it breaks down,” Aldridge Gardner, 46, said as he waited for a bus. “If it was a female, I would help her. If it was a guy, no, I’d be skeptical.”

Replace “stabbings” with “shootings” and we know the article would take a different tone, including research into the attackers history with firearms.

Maybe ‘harder’ is not the right word. Is it more cold-blooded to kill someone up close and personal with a knife as compared to a firearm? If so, should knife crimes carry longer criminal sentences?

In regard to the AP story, Steve Gilbert at Sweetness & Light has an interesting review of the story, which at first gives the impression the alleged attacker was a Jew from Israel, and eventually – after 20 paragraphs – gets to the fact he was an Muslim Arab, not a Jew.

How to travel by air with a firearm

Linda McMahon and the WWE vs Democrats: living in a glass house
Scroll to top