Look, so far I like Gov. Palin. I also like a few other conservative leaders. That said, I’m going to pick up her book this week like a few hundred thousand other readers and will specifically be interested in reading about her policy opinions.

Update: I infrequently get to listen to Limbaugh during the live show, but he points us over to a great piece at Power Line from Friday I missed. The Associated Press put 11 reporters on the story to “fact check” Palin’s book. Hilarious! Eleven reporters!

Unfortunately, I’m not sure if the book will deliver what I’m looking for. Melanie Kirkpatrick from the Wall Street Journal writes…

It is disappointing that Mrs. Palin devotes so little of “Going Rogue” to the issues that she and Mr. McCain ran on. 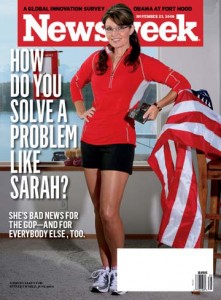 Bummer. Many may enjoy reading about her background and the dirt from the campaign trail, but I’m looking for political substance. I don’t expect Mark Levin Liberty and Tyranny-type brilliance, just a little somethin’ somethin’ ya know?

So, on to the Nov. 23 issues of Newsweek – sporting a business plan that cuts subscribed members in half – with the headline How do you solve a problem like Sarah? … and the sub-headline She’s bad news for the GOP – and for everyone else, too.

The same goes for Limbaugh, Hannity, Vicevich, Levin and McGough 😉

Is Newsweek asking if the GOP should put some sort of political hit on Sarah Palin? She’s a private citizen. If you think there must be some sort of dirt on this woman to cripple her politically and personally, you’re dreaming since they – the hundreds of reporters sent out on the task – would have already found it and exploited it for all it’s worth.

Oh, I forgot about Joe the Plumber. But anyway…

Malkin notes the recent attacks on conservative women. Why would any conservative want to get involved with running for office these days is totally beyond me, but maybe it’s knowing that almost 60 percent of Americans consider themselves conservative or very conservative.

We’re not arguing with the people, we’re fighting a battle against the main street media.

Conservatives just want to be liked

Palin schedule: Fundraiser in Denver instead of Republican debate