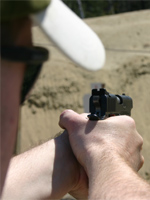 Unbelievable. Brooklyn Assembly members Annette Robinson (D-Bedford Stuyvesant) and Darryl Towns (D-East New York), have put forth legislation that would require police officers – when a life is threatened – to shoot for arms or legs instead of center of mass. They mistakenly have replaced reality with a Hollywood movie.

Why not just demand they shoot the gun out of the hands of the attacker?

The legislation will probably go nowhere, but this is the type of crap lawmaking that would ensure criminals are protected through rules of engagement intimidation. The bad guys – similar to terrorists, Taliban and al-Qaida overseas – need not worry about rules of engagement, but if this law passes, law enforcement in the state of New York will know they could be charged with manslaughter if their shot placement is not “just right” or if they fire one too many rounds.

Law enforcement officers are trained to shoot until the threat is stopped, not to shoot to kill. As it turns out, becoming involved in a two-way shooting gallery is a stressful situation – who would have known? With that stress in mind, law enforcement and civilians trained in self defense are taught to shoot for center mass, the largest part of the body that can be hit effectively and stop the threat. In other words, it’s damn hard to hit a target under stress, so to make it easier to engage and stop the threat, take the easiest shot – center mass.

When a firearm is drawn to stop a threat, three factors come into play before and during the trigger pull. First, a conscience decision to fire and stop the threat has been made. Second, the threat (target) must be available. And third, it must be safe to engage the target. Every round must be accounted for, so why add the additional burden of aiming for an arm or leg during the legal use of lethal force?

Using a firearm to shoot anyone – anywhere on their body – is lethal force.

But in the world of Hollywood movies and the minds of Robinson and Towns, there is some sort of racist component to pulling the trigger of a firearm.

Here are the details for bill number A02952, currently held for consideration as of May 18 in the New York State Legislature. The following is not directly from the bill, rather the official justification attached to the bill listed on the site. Note the racial component.

In recent years, the killing of criminal suspects by police has focused the public attention on how police respond when the suspect is a member of an ethnic minority. The issue is highly controversial, with critics accusing the police of racism while supporters deny any racism and assert that the killings have been in good faith or an unfortunate mistake.

This bill would modify how a police officer responds when he believes he must use his gun to defend himself or another, or to apprehend a suspect who is resisting arrest. It requires the officer to use his weapon with the intent to stop, rather than to kill such a person. There is no justification for terminating another’s life when a less extreme measure may accomplish the same objective.

For example, an officer would have to try to shoot a suspect in the arm or the leg. The bill will not penalize a good faith effort to shoot with this intent, even though the shot may prove fatal. Further, the number of times an officer shoots a person should not exceed the minimal number necessary to stop the person. If one shot accomplishes the purpose, it is neither necessary or appropriate for an officer to empty his barrel. The bill is intended to limit the use of force to the minimal amount needed.

This is dangerous and absurd legislation, and to think we have leaders in our government who think this way is disgusting.

Obama sends troops to border – Krauthammer: Get the unemployed to work,...
Scroll to top