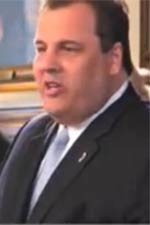 I found this interesting, even though we’re talking quite a different demographic when comparing New Jersey to all of the United States.
In the Garden State, Gov. Chris Christie’s (R-N.J.) job approval rating is 51 percent, with 36 percent – including probably 99.9 percent of teachers – disapproving. How does that compare to President Obama?

The Quinnipiac University survey of 1,190 registered voters found 51 percent approve of Christie’s job performance, while 36 percent disapprove. Voters are also more likely to identify Christie as a “leader” (51 percent) than as a “bully” (39 percent) when asked to choose.

It’s a significant improvement from June, when voters were split down the middle on both Christie’s approval rating and whether he’s more of a bully or a leader.

Keep in mind that Christie seems to be getting hammered by the unions in New Jersey, and I mean really hammered.

AP at Hot Air compares Christie’s “significant improvement” to Obama’s, well…. how shall we describe it? Again from NJ.com.

Garden State voters are split on how they feel about President Obama, with 47 percent approving and 47 percent disapproving — his lowest rating in any New Jersey Quinnipiac poll.

Talk about a polarizing figure in politics!

Keep in mind that back on July 21, Quinnipiac had Obama at 44 percent, so he may have gained a few points … probably since there has been little legislative action from Washington since the summer break started.

A year after President Barack Obama’s political honeymoon ended, his job approval rating has dropped to a negative 44 – 48 percent, his worst net score ever, and American voters say by a narrow 39 – 36 percent margin that they would vote for an unnamed Republican rather than President Obama in 2012, according to a Quinnipiac University poll released today.

This compares to a 48 – 43 percent approval for Obama in a May 26 national poll by the independent Quinnipiac (KWIN-uh-pe-ack) University and a 57 – 33 percent approval last July, just before the political firestorm created by opposition to his health care plan galvanized political opponents and turned independent voters against him.

In this latest survey of more than 2,000 voters, independent voters disapprove of Obama 52 – 38 percent and say 37 – 27 percent they would vote for a Republican contender in 2012.

Slavery and that Dubious Notion of White Guilt