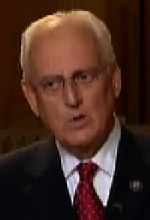 Correct. Well actually Neil Cavuto catches New Jersey Congressman Bill Pascrell in an old Democrat talking point … “We won’t balance the budget on the backs of seniors”, wherein the Congressman had a little trouble walking it back. If it weren’t so sad,it would be funny. But alas, it’s a pathetic commentary on the state of politics in America.

The video is actually very entertaining, watching this Pascrell defend his position opposing the President’s Debt Commission recommendation to raise the retirement age for social security benefits from 65 to first, 68 in 2050, and 69 in 2075. In other words, the bill designed to extend benefits for another two generations would begin to affect children who are currently 4 and 5 years old.

Pascrell misses this right from the start because of a typical lefty knee jerk reaction whenever anyone mentions social security. “I hope it’s not Russian Roulette.”

As I mentioned above, this really speaks volume about the state of politics today. A statesman would understand that this is little sacrifice to extend the life of a program that people have come to depend on, instead of sucking it dry so that 5 year old can pay for us, but nothing left for him or her. It speaks volumes about the partisanship that has developed that even the deficit problem is not above the Dumbocrats sacred cow.

Social Security has begun cashing in it’s chits, the IOU’s left behind after Congress robbed the cash to pay for other programs. We now have to make good on those IOU’s, and in a couple decades, even the IOUs will not cover the benefits promised to too many people. But don’t worry my little mobsters, your children and grandchildren can deal with it.

If you think $700 billion is nuts, wait for the Social Security rescue plan

You know its getting bad…

Are tax “deductions” just earmarks by another name? UPDATE: The...
Scroll to top