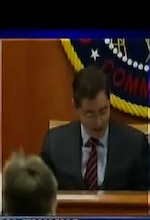 I spent the better part of the show on this and for good reason. It’s a bad idea. It gives extraordinary powers over the internet to the FCC to solve a problem that exists only in their minds. Worse … as John Fund pointed out in the WSJ  … this is likely just the beginning on control on the greatest gift to freedom of speech since the US Constitution.

Just to summarize, The FCC ruled yesterday, despite Congress sending a clear message not to do this and a federal district court throwing out a similar attempt earlier this year, it would indeed impose it’s jurisdiction over internet service providers, who they charge and for what under the name of net neutrality. Stay with me on this one please:

The rules are expected to bar providers from discriminating against legal Internet traffic and require more transparency. They also would let broadband providers for the first time charge more to companies that want faster service for delivery of games, videos or other services.

Here’s the rub. ISPs have not restricted any traffic, other then the technological limitations might impose. There has been no problem. Rather the WSJ points out, it was the fear that they might.

Robert McDowell one of the Republican Commissioners voting against this, told Brian Sullivan last night on Fox, this is just a bad idea. Any potential problem, he points out, can be handled through increasing competition not regulation. But then points out … that’s not what the FCC is after. It’s control, and he’s worried.

Net neutrality has become a contentious issue as worries grow that large phone and cable companies are growing too powerful as Internet gatekeepers. Start-ups and small businesses that rely on the Internet to provide shopping, information or other services to consumers are particularly concerned.

Thus, the FCC claims, without Congressional approval and defying a Federal Court decission, authority over ISPs and how much they charge just because they fear something might happen, even though there has been no evidence that any such activity has or would occur.

The bone the FCC threw the ISPs to get some to come on board was to “allow” them to charge companies like Netflix more for using more bandwidth, although the FCC Chair Julius Genachowski has already said it’s unlikely they would allow any such thing. It’s all one big ruse, designed to give the Executive Branch control over something they have had no control. And John Fund points out … with good reason.

As John points out, this has been a long held dream of the progressives to control the greatest threat to their power and propaganda … a free internet, under the guise of consumer protection.

The net neutrality vision for government regulation of the Internet began with the work of Robert McChesney, a University of Illinois communications professor who founded the liberal lobby Free Press in 2002. Mr. McChesney’s agenda? “At the moment, the battle over network neutrality is not to completely eliminate the telephone and cable companies,” he told the website SocialistProject in 2009. “But the ultimate goal is to get rid of the media capitalists in the phone and cable companies and to divest them from control.”

A year earlier, Mr. McChesney wrote in the Marxist journal Monthly Review that “any serious effort to reform the media system would have to necessarily be part of a revolutionary program to overthrow the capitalist system itself.” Mr. McChesney told me in an interview that some of his comments have been “taken out of context.” He acknowledged that he is a socialist and said he was “hesitant to say I’m not a Marxist.”

In 2009, Free Press commissioned a poll, released by the Harmony Institute, on net neutrality. Harmony reported that “more than 50% of the public argued that, as a private resource, the Internet should not be regulated by the federal government.” The poll went on to say that since “currently the public likes the way the Internet works . . . messaging should target supporters by asking them to act vigilantly” to prevent a “centrally controlled Internet.”

In other words … shape net neutrality as a protection against the big bad ISPs and then set up the central government as the rescuing hero.

Review on Net Neutrality – a problem that does not exist?

Congress strikes back: the FCC and the NLRB
4 replies