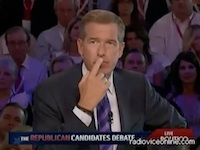 Let me say right out of the gate that I am not a proponent of the death penalty, although there are times when I think I’d gladly let someone else pull the switch, especially in cases like the Petit case. But NBC’s Brian Williams question was so snarky and so pointed and so beyond journalistic pale, that I had to put this up. I think you’ll feel the same way after watching the video no matter where you stand.

The question begins with Brian Williams asking Rick Perry that his state has enforced the death penalty more than any other state in the nation. He then asked the governor if he sleeps well at night. Perry’s response I thought was measured and well done.

As someone who is pro-life I am naturally inclined to be against the death penalty. But I wonder. Will Brian Williams in the presidential debate asked Pres. Obama, who has a State Sen. block in Illinois law to protect infants born alive during an abortion procedure, and who has robustly defended late-term abortion, if the young president sleeps well at night. My question is he won’t because Brian Williams most likely holds the lefty position on this one. Disgusting! Your comments.

UPDATE: For  Your amusement, here’s Chris Matthews totally aghast at the audience response to Brian Williams question. Congressman Rick Mulvaney calms Chris down enough to explain Perry’s position and why he won’t back down.  It’s true, conservative politics is totally alien to a lefty.

But Matthews has this right. There is a difference between Republicans and Democrats on this. Most Republicans believe that when you take the life of a young child or a police officer or young couple in a brutal act of violence justice must be served.  in Texas that means the death penalty.

My opinion on the death penalty
10 replies

Gingrich pulls the covers off of MSNBC: classic Newt