Oh for crying out loud. Three Navy SEALs face assault charges after they captured Ahmed Hashim Abed, who is suspected as being the ringleader of the March 2004 planned ambush on four Blackwater contractors who were involved in a support mission to deliver food.

Unbearable this is. What is going on here? From Fox News, with hat tips to Blackfive (who may soon blow a gasket about this crap) and Atlas Shrugs. As a reminder, (Wiki…) four armed contractors, Scott Helvenston, Jerko Zovko, Wesley Batalona and Michael Teague, were dragged from their cars, beaten, and set ablaze. Their burned corpses were then dragged through the streets before being hung over a bridge crossing the Euphrates.

Navy SEALs have secretly captured one of the most wanted terrorists in Iraq — the alleged mastermind of the murder and mutilation of four Blackwater USA security guards in Fallujah in 2004. And three of the SEALs who captured him are now facing criminal charges, sources told FoxNews.com.

The three, all members of the Navy’s elite commando unit, have refused non-judicial punishment — called an admiral’s mast — and have requested a trial by court-martial.

Ahmed Hashim Abed, whom the military code-named “Objective Amber,” told investigators he was punched by his captors — and he had the bloody lip to prove it.

You have absolutely got to be shittin’ me, a bloody lip? Good Lord, I hope he didn’t have any scrapes on him’s widdle knee. This is another slap in the faces of those we ask to do the toughest job on the damn planet. I think it may just be time to have a no prisoners policy. All of the organs of our government now seem to be more concerned with the safety and legal rights of murderous barbarians and oblivious to the damage they are doing to the morale and esprit de corps of our troops, not to mention the safety of our country.

And I’m not exactly sure what Allah over at Hot Air just wrote about this story, but Uncle Jimbo just posted again and ripped him a new one. Just a taste…

I know you have no earthly clue just how god-awful complicated it is to actually perform a raid and scarf up a bad guy, let’s just say it rates up there with trying to conduct a Beethoven Symphony with your orchestra in free fall, screaming towards Earth like a phalanx of freaking lawn darts. That is why we like to send a f**king Hellfire down on them and last time I checked that leaves a little more than a god damn bloody lip. And yes I am saying I don’t care if he got it once he got to base. What if the guy who clocked his murderous ass knew Scott Helverson, who this bastard help kill, burn and then defile his corpse? Do you really want to be on record saying he should be made an example of? Do you remember what Kos said about the four men this scumbag killed you dumbass? I’ll remind you “F**k them”. You are sure in illustrious company.

A friggin’ bloody lip? Warning, don’t scroll down if you’d rather not view an image from the bridge. 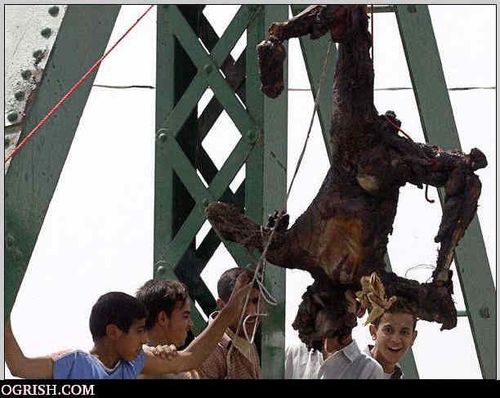