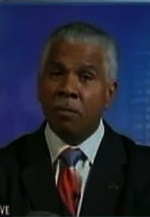 Not quite as good as the Kirsten Powers match, but still pretty good nonetheless. At issue in this Megyn Kelly debate, the NCAA resolution calling on the Tea Party to condemn the racist elements in its group. But as Tea party representative Phillip Dennis, it’s kind of hard to condemn something that does not exist. It’s the old, how long have you been beating your spouse conundrum. If you answer you have never done that, the headline becomes you deny beating your spouse. Pretty slick.

It’s a two part video. Part One is the section where the NAACP representative Hillary Shelton makes the tired charge that Tea Party folks shouted racial slurs at the DSC Health care rally. Tea Party rep Phillip Dennis responds that has never been proven and thus won’t apologize. Plus, Kelly asks, why did the NCAAP not condemn the Ken Gladney beating.

Note: My You Tube account is currently down and the two part video will be available in a few hours. Until then here is the full interview via Hot Air.

Of course the simple analysis here is the NCAAP acting as a political arm of the Democrat Party. The idea is to devalue the Tea party by demanding an apology, which is they do they admit racism and if they don’t they condone racism. I suspect that stuff doesn’t work anymore.

Those Chilean miners would be dead if they were in the ... Tea Party?

Matthews to Inglis: Isn't being educated a disadvantage for you as a conservative?

Shahzad failed bombing will turn Tea Party into dangerous bigots, or something
39 replies

Matthews to Inglis: Isn’t being educated a disadvantage for you as a ...
Scroll to top