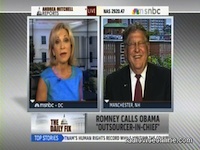 I watched this clip of Mitchell vs. Sununu in a post debate interview on “Andrea Mitchell Reports” and was laughing out loud at the way Sununu figuratively (a good word for Biden to add to his 500 word vocabulary) beat her over the head with every one of her Democrat talking point based questions.   It was poetry!

But Andrea was undeterred: she tried everything:

1) trying to knock him off message by questioning his use of the word “lazy” for the preezy (dog whistle anyone?)

3) comparisons to Reagan (not for good reasons)

6) throws up paying for the “Bush tax cuts” that Romney will continue and Sununu reminds her that Øbama continued and supported these tax cuts in 2010  (for everyone) and this year (with the class warfare cutoffs) and what he said when doing so, i.e. you don’t raise taxes in a recession.  Sununu also aptly points out that we are no better off now than then, which the preezy seems not to notice.

Be sure to watch her face on the split screens when Sununu answers. they are PRICELESS!  There are also hand slaps on the desk to accompany her frustration with her failure.

The only reasons I can think of that would get Mitchell to keep inviting Sununu on her show are:

1) she continues to think she will be able to “get” him eventually;

2) it raises her ratings from near zero;

3) the repeated figurative blows to the head delivered by Sununu have knocked any sense of self preservation out of her head.

Watch it and enjoy, it is seven minutes of glorious frosting on the exquisite debate cake Romney served up on Wednesday.

Did Gingrich pack the debate audience with supporters in South Carolina?

What Romneycare has cost Massachusetts

Olbermann suspended from MSNBC after violating network’s policies and standards

What happened to President Obama?

Seniors, be thankful this is not 2013
Scroll to top