Imagine a place where you can be accused of blasphemy and threatened with the death penalty based on hearsay and with virtually no witnesses. Welcome to Mehrabadi, Pakistan, just outside the city of Islamabad, where radical Islam thrives.

From the UK Guardian.

An 11-year-old Christian Pakistani girl could face the death penalty under the country’s notorious blasphemy laws, after she was accused by her neighbours of deliberately burning sacred Islamic texts.

Rifta Masih was arrested on Thursday, after complaints against her prompted angry demonstrations. Asif Ali Zardari, the president, has ordered the interior ministry to investigate the case.

The story starts with a simple accusation. In places like this, Christians are abused, treated badly and forced to live and worship in squalor. This is racism and hate.

The accusations and conditions got so bad, 900 Christians were forced out of their neighborhood. They did not just leave because they wanted to leave, they were forced out. Those who stayed were completely shunned. Nobody would serve the Christians, nobody provided them with water. They have been locked out of their places of worship.

That simple accusation – burning a Quran – quickly turned into a demonstration of between 600 and 1,000 people. Even though the police were unwilling to take action, the crowded demanded it and eventually police charged the girl with blasphemy and took her into custody. This is mob rule.

Hammad Malik, a 23-year-old with a shaven head and bushy beard who is deemed a “scoundrel” by the Christian community, said he saw Rifta walking out of the tiny, single-room dwelling where she lived with her parents and sister at some time after 6pm. He said it was pure chance that he noticed her bundle.

“I looked at it but did not know exactly what it was but I could see it had words written in Arabic,” he said.

He concedes that no one actually saw her burning anything as the offence allegedly happened inside the house, and she was caught while finding somewhere to throw away the remains. However, the local mullah claims there was a witness: another young girl who caught her in the act and then ran to the mosque to raise the alarm.

Some Christians suggest it was all a plot.

In one version, according to priest Boota Masih, a Muslim neighbour asked the girl to throw out the ash into which the desecrated pages had been placed.

It looks like the radical Islamic fundamentalists got what they wanted. Since they were offended by the Christians singing and playing instruments in church – described as “noise” coming from the three churches in the area – they wanted them gone. They ensured conditions were so horrible and dangerous for them, they forced them to leave for their own safety. Isn’t that so kind of them? 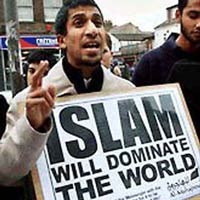 Maureen Dowd doesn’t get self defense … clueless about firearms