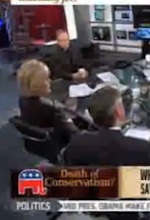 Watched this yesterday afternoon on my Morning Joe tape and just could not believe my eyes or ears. Hey, it’s not just Obama that’s out of touch.

This round table of MSNBC “wizards of smart” (H/T Rush) is trying to figure out why women are joining the Tea Party. Well, perhaps if they went to one before commenting on one, they would have an answer. I am just stunned that they are so baffled.

The video is from The Daily Caller and their commentary is pretty good but I think even they miss the point. It’s not a matter of women and men … it’s a matter of people banding together to make their voices heard. People who see a government that wants to regulate everything from their food to their thermostats, from healthcare to taxation. They see a budget so bloated that it will affect not only their take home pay but that of their children and grandchildren. They see a government intrusive and out of control. They’re worried. Their moms are worried.

Rebecca Wales, spokeswoman for Smart Girl Politics, a group devoted to mobilizing women in the Tea Party, was pleased that Tanenhaus and Barnicle were on the right track.

“Women are primarily responsible for the finances in their household, own small businesses, take care of their children and their aging parents,” she explained to TheDC. “And when those things are threatened, women fight back. This movement empowered them. They found the means to become politically active, found a voice, where they never had before.”

How’s the condition of the Mall this morning?

We are not looking for the conservative Barack Obama
15 replies