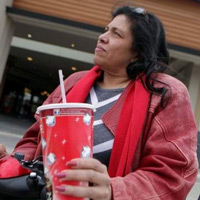 Oh the humanity. If popcorn and Twizzlers cost too much at the movie theater, stay home and get to know Orville Redenbacher.

But noooooo… these fools have found a lawyer to file a class action suit against the AMC theater in Livonia, Michigan because the cost of candy, popcorn and soda is just too damn high. From the Detroit Free Press.

But he hates the prices theaters charge for concessions like pop and candy.

This week, the 20-something security technician from Livonia decided to do something about it: He filed a class action in Wayne County Circuit Court against his local AMC theater in hopes of forcing theaters statewide to dial down snack prices.

“He got tired of being taken advantage of,” said Thompson’s lawyer, Kerry Morgan of Wyandotte. “It’s hard to justify prices that are three- and four-times higher than anywhere else.”

Maybe Joshua should file a class action suit against Johnny Depp for making more than $20 million per film? It’s not fair!

Movie theaters – for first-run, modern-day films – usually get 20 percent to 30 percent of the box office take depending on the distribution deal. Profit is by no means guaranteed and theaters often must agree to show the film multiple times per day for a minimum of a couple of weeks even if it’s a box office bomb.

Think of having to keep Gigli, the one-star worst-movie-ever-made wonder featuring Ben Affleck and Jennifer Lopez playing in your theater with the seats – that can easily cost $400 each – mostly empty for a week or more. They won’t even play Gigli on cable, TV executives are too afraid.

If you’re a theater owner/manager, you’re hoping a lot of people are buying popcorn and bags of Swedish Red Fish when your showing Gigli with a gun to your head. In short, the concession stand subsidizes the cost of keeping the projectors running and ensuring you enjoy the surround sound experience.

Motley said she and her office manager spent $5 each for morning movie tickets and $11 each for soft drinks and popcorn.

“When I was a kid, $1 could get you into the movies and buy you a pop and popcorn. But not anymore,” Motley said. “I don’t know how kids can go on their own to a movie anymore.”

Says the woman with the 763 ounce Diet Coke in her hand. Look, I actually worked for more than a decade at one of those 99 cent theaters that had candy, popcorn and soda prices that were a heck of a lot more expensive than you could buy a the local drug store. I know, the concession stand subsidized the cost of bringing in the film.

They certainly might be charging a lot for candy and soda, but nobody is telling you to buy it. Pick up the ticket and walk in. Stop and have dinner and a drink before or after the movie. Eat your Whoppers in the parking lot.

Regal Entertainment Group – parent corp of AMC – had a net profit margin of 1.5 percent in it’s last reporting year. What that means is they lost a lot of money operating the theater and showing movies, and charged enough for concessions to barely make a profit … and you want to sue them.

Update: Jazz Shaw over at Hot Air picked up on this story today (Tuesday).

Williams reminds us: Manufacturing productivity has doubled in 25 years