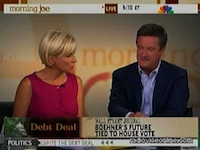 Below the fold you’ll just find a nice piece of video as Joe Scarborough and Michael Steele defends the tea party and praise their influence. But John Heilman just can’t stand it and holds to the line that the tea party held America hostage during the debt ceiling talks. It’s more fun than informative, but it gives your pretty good idea of how much the left hates the influence of the non-influential, my little hobbits.

Joe Scarborough starts it all off by goading Mika into joining the tea party but it degenerates from their as as Michael Steele lauds the tea party for standing up to the slings and arrows of being called terrorists and bomb toters and working to bring real hope and change to Washington. At that point John Heilman just loses it. Have fun my little terrorists.