Here are some pictures from yesterday’s “Meet Congressman Chris Murphy” event at the Stop and Shop in Simsbury, Connecticut. A couple notes as you scroll through:

The “Stop the government health care bill” folks outnumbered the “AFSCME” union people by about 250 to 10.

The only potty mouth came right at the top, again from a fellow union brother (confirmed this morning by another AFSCME employee on my show who called it disgraceful).

The only pre-printed “astroturf” signs were made by the union.

One union employee at first thought I was a newspaper reporter (must be the new scruff, or maybe I can’t get my old reporter days out of my blood) and wanted to make sure I knew that every citizen there had been bused in by the insurance companies. It just made me laugh since I knew just about everone there.

Finally, there were some Tea Party regulars, but the majority of the people there were first timers.  The crowd included gray hairs (Hey, I guess that means me too) suburban housewives (not too timid either), teenagers, college students and blue collar workers. BUT NOT ONE BROOKS BROTHER’S SUIT.

At no point was the crowd unruly. Angry yes, but not unruly. And all waited patiently to get their question answered, which, for the most part, they were not forthcoming from the young Congressman. And yet for some reason Murphy’s people felt compelled to call the police.

These are the people Nancy Pelosi labled Nazi’s and Barbara Boxer called Brooks Brothers suited insurance agents, that the Democrat Party called “The Mob”. You can watch the videos for yourself at those links.

All good Democrats should be embarrassed and ashamed of the behavior of their party. We need an immediate apology from our Congresspeople in Connecticut. 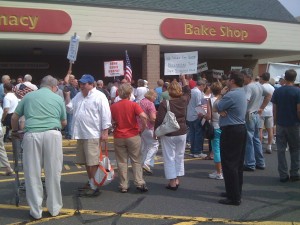 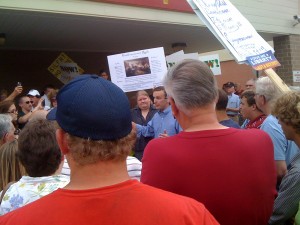 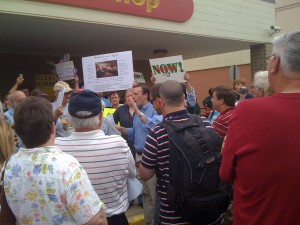 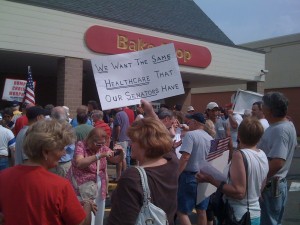 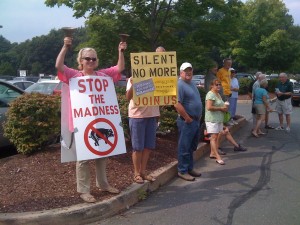 I like the “I want the same health care as our senators”. Our Senator of course is heading to Sloan Kettering. Good for him. My guess is under his plan he and his colleagues will be the only ones afforded that privilege.

Olbermann proclaims he would rather go to jail

Obamacare – It’s all about spin and marketing
2 replies