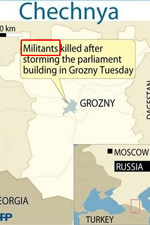 I’m certainly not up one what’s happening in the Chechen Republic, or their tumultuous relationship with Mother Russia, but I do understand Chechnya is experiencing their own terrorism problems. As it turns out, Islamic militants are a part of the problem, yet the Agence France-Presse (AFP) could not be bothered to mention the “militants” religious affiliation until late in their original article.

This morning, AFP did not mention the word Islamic until the very end of the article. Five hours or so later, the AP posts the story and includes the phrase “Islamic militants” in the headline and the first words of the first paragraph to leave no doubt who launched the raid.

At about the same time, the AFP did some editing of the story to include reference to Islamists.

Gilbert has the original.

The group of up to four militants broke into the parliament building in the Chechen capital Grozny early in the morning, killing four people and sparking fears of a major hostage crisis before security forces moved in.

Officials said that all the militants were killed by the security forces, with reports adding that some had been shot dead while others had killed themselves by detonating suicide charges.

And the revised version posted now. The second paragraph was added somewhere around 3:45 p.m. ET and my emphasis is in bold.

The group of up to four militants broke into the parliament building in the Chechen capital Grozny early in the morning, sparking fears of a major hostage crisis before security forces moved in.

The dramatic raid was a major blow to Kremlin claims that stability has returned to Chechnya, after two wars since the collapse of the Soviet Union and years of Islamist and separatist-inspired unrest.

Officials said that all the militants were killed after an hour-long standoff, with two of the rebels shot dead by the security forces and two killing themselves by detonating suicide charges.

By editing the original, someone at AFP must have thought the original article was burying an important part of the story and the edit was made. I understand the facts of the article remained unchanged and the second version provided more information, so a retraction or correction was certainly not required.

Yet, what if these militants were TEA party members, Republicans, conservatives or Christians? Would that information be highlighted from the start? I certainly may be very picky, but the point is media reports have frequently left out the Islamic reference when it comes to violence and I think that is wrong.

Why, I wonder … did one of Army Pfc. Lance Aviles’ NCOs order him to delete two videos he recorded of the Fort Hood shootings? My guess is the video did not contain Maj. Hasan’s “Allahu Akbar” proclamation prior to the Soldiers of Allah’s shooting rampage, but we’ll never know.

Edited to add … I don’t think Aviles was ordered to delete the videos for politically correct reasons. I think the NCO was doing something he thought would prevent a hailstorm of activity including, but not limited to, terrorizing the families who would be suffering quite a bit for a long time to come. In hindsight, it was a bad example.

Is the media … are Americans …capitulating to Islamic extremists to be politically correct?

Putting America on trial – Sept. 11 will be our fault