If Mark Levin’s “Liberty and Tyranny” defines our country’s disease, Michelle Malkin’s latest, “Culture of Corruption, Obama and his Team of Tax Cheats, Crooks and Cronies” is a fantastic illustration of the resulting symptoms. Note: Michelle will be a guest with Jim on Sound Off Connecticut Wednesday.

In Michelle Malkin’s fourth book, Culture of Corruption: Obama and His Team of Tax Cheats, Crooks, and Cronies

, she dives into the details of stories pushed to page A15 of the Saturday afternoon paper during President Barack Obama’s rise from state to national politics, and on to the Executive Branch. The stories, when reviewed individually, may not seem like a big deal, but when added together tell a tale of nepotism, ethics deficiencies and complete hypocrisy.

Granted, some stories may have made page A1, but all seem to have been quickly forgotten. Malkin takes the time to detail the history, and very current stories involving the President Obama, Michelle Obama, Vice President Joe Biden, Hillary Clinton, and – who Howie Carr would refer to as – “all of their hacks” in political and private life. (Massachusetts hacks have got nothin’ on Obama hacks.) 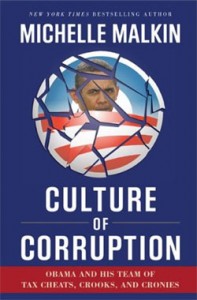 The book is an easy read, and you’ll have many “oh, I remember that” moments as you read through the text. Mark Levin’s book Liberty and Tyranny

(currently #8 in books at Amazon) is an excellent companion piece to “Culture of Corruption.”

Although honestly a bit difficult for me to read, Levin’s conservative manifesto is superb in its detail of how the modern liberal (statist) incrementally move power from the people to the federal government as he embraces the supremacy of the state. Levin describes the progression of the disease starting in the 1930s with FDR’s New Deal, and Malkin details the resulting symptoms as it pertains to the current administration.

Nepotism
Nepotism is big in the Obama historical perspective, and Malkin details ties to lobbyists and politically connected “consultants” who skirt federal lobby regulation as they move from political position, to private firms and back to political positions.

“Average Joe” Biden and Michelle Obama may just be the king and queen of nepotism in the current administration, and details concerning questionable, yet “legal” arrangements with MNBA, Amtrak, and the University of Chicago Medical Center – which created positions for Michelle Obama – among many others are highlighted.

I’m not sure if there is even one cabinet member or czar in the administration who does not have a conflict of interest. Of course, the problems are just symptoms of the disease which can not be treated individually.

Ethics Deficiencies
The most ethical congress ever. Transparency in government. Doing the right thing. Yes we can. All wonderful words that mean nothing to this administration. While promising ethical behavior, Democrats and Republicans alike fail. When promising transparency, Congress and the Obama administration continue to slam legislation through the House and Senate without giving the American people any time to review or digest the statists legislation that breeds soft tyranny and loss of freedom.

Malkin goes into the ethical deficiencies of Obama administration officials including Attorney General Eric “I hope this pays off” Holder, CIA Director Leon “how the heck did I qualify for this job” Panetta, Commerce Sec. Gary “I’ve got China” Locke and HUD’s Ron “opaque government” Sims among others.

Hypocrisy
From Biden family hedge funds to the Obama’s shunning corporate lifestyles on the campaign trail, hypocrisy seems to be a word that fits this administration’s style quite well.

Back to Attorney General Holden, Malkin notes as a senior partner at Covington & Burling, he was certain to be familiar with actions of the dozen or so firm lawyers who were representing detainees at Guantanamo Bay. Those lawyers – along with constantly claiming rampant torture at the base – are demanding detainees be tried in US Courts and provided the same “rights” US citizens have.

Obama thought critics had a point, and noted Holder would recuse himself from decisions and prosecution of Gitmo detainees represented by his old firm. Sure, the attorney general of the United States will totally stay out of it. Formerly recusing himself is like Joe Biden refusing to meet with lobbyists … he doesn’t have to, and Malkin frequently reminds us of the “wink and nod” atmosphere that has replaced formal meetings in Washington.

The well-sourced book (the last 77 of 368 pages include chapter endnotes) is a telling story of the lead-up to Obama being elected as president and his first five months in office. Laws are not always broken when discussing symptoms of the disease, but detailing the history and looking at actions and results – instead of lofty words and sound bites – is an important key to defeating the political agenda of the statists.

You can pre-order Michelle’s book

on Amazon right now, or pick it up at your local book store on Monday, July 27.

Other books by Michelle Malkin…

Symptom of the Disease: $600 million in benefits paid to the dead

Symptom of the Disease: Liberal professor dumbfounded about support for McDaniel in Mississippi

Symptom of the Disease: Candidates for president spent $7 billion on 2012 election
7 replies

Obama to raise the “Mission Accomplished” banner on economic re...Henry Gates Jr. – Do you know who I am?
Scroll to top