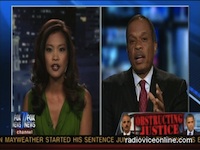 OK, Juan started this fight and Michelle ran with it as iI knew she would the minute Juan teed it up. Make sure you watch it all the way through. I can’t say if there will be long lasting hard feelings on Michelle’s part, but i can say there will be on mine.

The topic was the security leaks that many, including Democrats believed came from the White House to as Michelle said fluff O’s feathers, and moved on to Holder’s refusal to name a special counsel to investigate the leaks. From there it devolved into Juan Williams taking a whack at Michelle as a no nothing blogger as opposed to a real journalist like he, who goes out and tries to find out what top officials are really doing. That lit the fuse and well the fireworks ensued. Well worth more than one watch.

A couple things. As Instapundit points out it was the bloggers who stepped up and saved Juan’s sorry ass when he got fired from NPR. Two, the bloggers were the ones who pointed out the false Dan Rather Bush documents, led the way on Fast and Furious when the media ignored it, and were the first to dissect the crummy Obamacare law(see SOS) and on and on.

But Michelle has the better of this argument, because while Williams sometimes works as a “real reporter,” most often he’s working as a commentator, as he was last night.  That’s not a mutually exclusive state for Williams — and it’s not for bloggers, either.  Journalism is anact, not a status or an office.  Plenty of bloggers do go out in the field, get their own reports, and publish them independently.  Sometimes, news agencies pick up on those reports (and occasionally don’t credit the bloggers when they do, which calls into question their ownjournalistic ethics).  One of my longtime friends in the blogosphere was kind enough to use me as an example:

Juan will long be remembered for these comments … so will Michelle’s retort. Congrats.