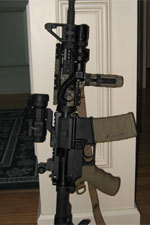 Ignorance. Putting their heads in the sand. Feel good legislation. I’m sick of politicians who cry for more restrictions on firearm ownership by law abiding citizens in the United States. Mexican President Felipe Calderon urged the return of the AWB today, and many in Congress cheered.

Unfortunately I don’t have video, but here is a summary from The Hill, including reference to Calderon’s position on the assault weapons ban (AWB).

Calderon said that while he respected the U.S. Constitution’s guarantees on gunowners’ rights, the legal flow of assault weapons has resulted in the weapons falling into the hands of drug gangs who are locked in a violent war with the Mexican government.

“I will ask Congress to help us, with respect, and understand how important it is for us to enforce current laws to stem the flow of guns and enforce existing laws as well as consider reinstating the assault weapons ban,” the Mexican president told lawmakers in both parties assembled Thursday morning in the House chamber.

Calderon’s plea won strong applause from Democrats, and some support from Republicans.

The assault weapons ban expired in 2004 without having been renewed by Congress.

Calderon said that the spike in gang violence in Mexico, which has reached a fever pitch as of late, coincided with the expiration of the ban, which was first authorized in 1994.

Crap. Total crap I tell you.

Let’s put this into perspective shall we? Connecticut still has an assault weapons ban in place as do other states including New Jersey, Massachusetts, New York and California (I think). The state legislation mirrors what was the federal assault weapons ban that expired in 1994.

Here are two pictures of what I refer to as defensive rifles. Both deliver one round each time you pull the trigger (semiautomatic), and both shoot 5.56 NATO and .223 Remington rounds. They both have the same barrel length. You tell me, which one is banned in Connecticut and the other AWB states? 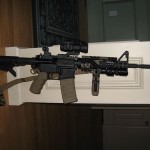 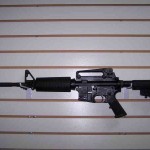 So, what say you? This is not a trick question, one of these rifles is banned because of one specific feature the firearm has. Believe it or not, the rifle on the right, hanging on the peg-board wall is banned in Connecticut simply because the stock of the rifle can be adjusted into multiple positions. That’s it.

The rifle in the left, with the red dot sight, 30 round magazine, two-point sling, forgrip, quad rail and remote light is perfectly legal in the state of Connecticut. It may look like the rifle on the left has a stock that can be adjusted, but it can not.

So now, would you say the AWB is feel good legislation or does it display the pure ignorance of politicians? It really could be both. Tell me those of you in the Connecticut State Legislature, do you feel like you’ve been had by the anti-gun lobby? In this situation, you have.

So, President Calderon and many in Congress think banning adjustable stocks, bayonet mounts, flash suppressors and grenade launcher accessories on a semiautomatic rifle will help solve the problem.

For your homework, go find out what AR stands for when referring to these rifles. As a hint, it’s not assault rifle.

And finally, I’d like to take the opportunity to challenge the Connecticut State Legislature to step up and ditch this law which is simply feel-good legislation. I know they read this blog. Care to chime in or will we hear crickets?

Yes, gun control activists want to disarm everyone over time

Arizona immigration law…Obama will simply ignore it
Scroll to top