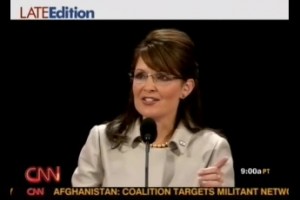 First this from Slate via Hotair:

I rarely remember my dreams, but for the past week, GOP vice-presidential nominee Sarah Palin has been haunting me. Night after night, she appears in my dreams, always as a scolding, ominous figure.

When I mentioned my Palin dreams toSlate colleagues, they volunteered their own. One Obama-supporting colleague dreamed she had urged her young son to kill Palin with a string bean. Another dreamed she was at a fashion show and Palin served her crème fraîche on little scooped corn chips. A third says, “In the Sarah Palin dream I keep having, she has superhuman powers but is not really a person at all.

Umm … sorry … but I’m just a bitter clinger … what the heck is crème fraîche?

Then this is my favorite … from the WaPo duo of Amy Argetsinger and Roxanne Roberts. Go ahead let em know what you think of this investigative work, in the tradition of  … well … umm … meeeeooow.

Blackburn told us that, contrary to some reports, Palin was second runner-up, not the second-place finisher, and that Palin competed again in ’85 but didn’t place. Everyone of course now wants to hear the nasty, catty, behind-the-scenes stories; Blackburn says there aren’t any. Palin signed Blackburn’s pageant program like this: “Maryline, I do love you. You are more admired than you ever know. Please keep God Number One, he’s got great things for you, baby.”